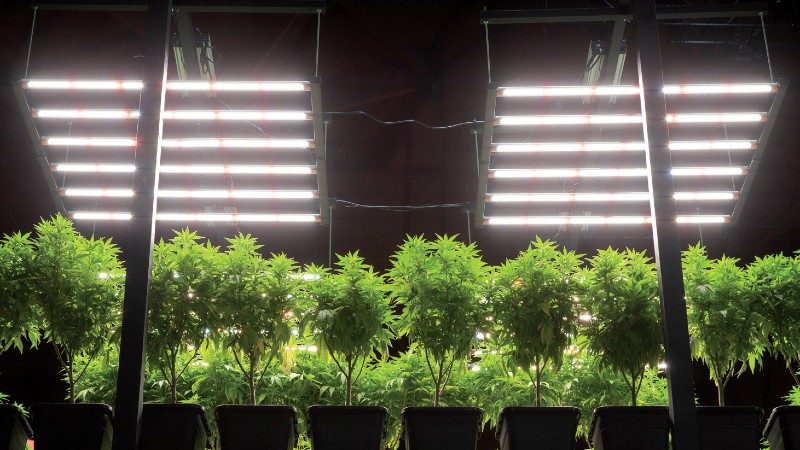 Four growers give their advice on some of the most challenging aspects of cannabis cultivation.

The cannabis industry is still a new market, and with that come several challenges and opportunities. Fellow growers who are navigating these waters on a day-to-day basis offer the best insights into crop production and how to be successful and profitable.

Many of the issues that arise with cannabis mirror those of other ornamental crops. “Spider mites, aphids and botrytis are our main three,” Higginbotham says. Control options, however, are much more limited, since many of the pesticides approved for other crops are not approved for cannabis and hemp.

“Everything we use is OMRI certified, so it’s certified for organic production,” Garces says. “We try to make sure that if cannabis isn’t listed there, maybe tobacco is, and we also make sure it’s OK with our state regulators before we
apply anything.”

Garces says he expected to have botrytis, mites and aphids on the crops, but he was surprised by some of the other pests and diseases, such as ants and termites in outdoor production and Southern bacterial wilt, much more commonly found on tomatoes.

An integrated pest management program (IPM) is key, including biological fungicides and bactericides. For Higginbotham and Garces, though, biological control in terms of beneficial insects has yet to be a cost-effective solution in most cases.

Another important component of a successful IPM program is to always check the material that you are receiving, according to Sangster. “In transit, there’s so
much that can happen to biologicals,” he says. “The packages could get heated up or they could get left out in the cold, and then you’re putting out BCAs [biological control agents], and you’re spending a lot of time and labor to do that, and the material is just not alive.”

Sangster and his team have started doing quality assurance checks on the material they are getting, establishing Mason jars with sticky traps in them, putting sachets of BCAs in them and coming back in a day or two to see if the sticky traps have any biologicals on them. This determines if what they received is viable.

For growing cannabis, lighting can be a tricky equation between installation cost per square foot and electricity cost. Also, sustainability is increasingly at the forefront when building a new greenhouse or retrofitting an older one.

Sangster says his team has learned to produce high-quality plants with the more traditional high-pressure sodium (HPS) lights, but he doesn’t see these as the way of the future in the cannabis space.

“When you start to dig deeper into the amount of times that we’re changing bulbs, the risk that this [HPS] technology poses to the environment in terms of catching on fire, arcing and things of that nature, and then the cost savings that we see with LEDs, it’s just a no-brainer moving forward in this industry,” he says. “A lot of the activities we do in cannabis are so energy-intensive, we have to look at sustainable net ways.”

Higginbotham has a unique perspective on lighting challenges being in Salinas, California, and relying on Pacific Gas and Electric (PG&E), and a strained energy grid. “I deal with a power out[age] every week for all of production,” he says.

California, however, has put significant incentives in place to get growers away from using traditional lighting, like HPS, and toward embracing LEDs. One such program is the California Public Utilities Commission’s Market Access Program, which authorized $150 million to fund new projects in 2022 and 2023, such as switching to LEDs, to reduce peak energy usage.

“Our Greenfield facility was originally all HPS, and [California] had a rebate program that allowed us to completely remove all of the HPS, replace with LED, and, as long as we did not surpass the energy usage annually of the HPS, we would get the whole cost of the project recouped over the next six months,” Higginbotham says. “It literally didn’t cost us anything to completely outfit the greenhouse with LED and replace HPS.

“At least [in] my experience, there’s plenty of research out there also to support these types of technologies over HPS for crop performance — increased yields, and more economical solutions for growers.”

LEDs, however, aren’t the only option depending on the size of your operation and how you’re growing the plants. Clark largely grows for research purposes and has tried to determine how little light you can use. He has tested using night interruption, something traditional horticulture growers are quite familiar with, to turn low lights on in the middle of the night to trick the plants.

“For us, it’s always cost of production per pound that is the most important thing we focus on,” Clark says. “Sustainable is one thing but being efficient for that cost per pound is another thing.”

Garces has had similar success with a more rudimentary lighting system. “We have seen farmers be successful, including us in the greenhouse, with low-end lights, LEDs, but not enough to grow the plant, just enough to keep them in veg,” he says.

Cannabis cultivation is very labor-intensive, and the timing of each task is crucial to the success of the crop.

“What we’ve seen is if we hit our task on time and we keep up our biosecurity standards where we want them to be, we can mitigate the risk of losing our crop to total yeast and mold, just by being on time with our tasks,” Sangster says. “[Labor] is a question that we’re going to have to figure out, and it’s something that we’re going to have to dive into deeper, especially as the crop commoditizes and prices go down.”

Although there is some room for alleviating a portion of the labor demand with automation and genetics, there is no easy solution.

“We’ve done some research in past grows about minimizing the amount of hands on every plant,” Clark says. “What can we do early on in just the way we grow that changes the dynamic of having that many hands on there?” The more immediate need is to find people willing to work and at a price that makes sense for both the employee and the company.

“[Labor] is our No. 1 direct cost, period. It trumps energy; it trumps anything else,” Higginbotham says. Higginbotham and StateHouse Holdings work closely with labor contractors to find employees quickly and create incentive plans to retain them, something he says helps to increase throughput and reduce cost.

Even so, his team is up against strawberry growers down the road who will pay based on the quantity picked per day. “That’s more than I can afford to pay on trimming and other processes,” Higginbotham says. “So it’s a constant challenge.”

Garces, in his position at Treadwell Farms and as a professor at Valencia College, talks with a lot of young people who have an interest in working at a cannabis farm, but he warns that those first couple of weeks sometimes weed out those who can’t make it in the greenhouse or in the field.

“They don’t realize it’s a farm first and cannabis second,” Garces says. “It’s going to be hot, sweaty; there’s water moccasins depending on where you are in the field.

“Once they get over that kind of sexy marketing part of cannabis and realize it is farming first, you get to realize, and you get to see, who is really looking at this as a career.”

Long-term, Sangster envisions being able to implement much more automation than currently available in the cannabis market to help with the labor challenge.

“In 10 years, I hope that we are at a point where we’re running stable seed lines … I came from plugs and cuttings,” he says. “The uniformity behind that, the stability behind that, I think just lends itself to lowering labor costs.

“The technology is there; it’s just we need the genetics to catch up in cannabis to enable us to use that equipment.”

Sidebar: A Push and Pull

The cannabis market moves fast, and the greatest subject is trying to keep up. There can be a dichotomy between what makes the most sense from a grower standpoint and what the customer is demanding at a specific moment.

“As a grower, I want a plant that does well in my greenhouse, that’s disease-resistant, that’s hardy and has a nice morphology,” says Colin Clark, owner of Never Winter Botanicals. “But usually the genetics I pick as a grower aren’t the genetics I would pick as marketing.”

“When you think about production, and you think about trying to be cost-effective and efficient, it’s ideal in a production system to have fewer cultivars,” he says. “But the brands, the customers, the retailers want variety and they want it constantly.”

Dropping prices are widespread and well-known in this industry. Higginbotham says that over a year ago, in April 2021, they started selling at approximately $1,600 per pound in California, but now they’re at $500 or $600 for the exact same cultivar.

“It just all comes down to cost while trying to keep the integrity of the quality as well as the margin,” he says.

There are a lot of unknowns in the cannabis industry, and although there is no predicting the future, Clark offers a unique prediction of where things may be headed, using the beer industry as a model.

“I think you’re going to get to the point where you have this mass production, that as long as the plant is safe, it’s clean and it provides the THC, a large majority of consumers that’s what they’re looking for,” he says. “And then, like craft beer, you can always have the higher quality, kind of niche, market.”

To hear more insights from all four growers in this article, you can watch our panel discussion in its entirety on demand at gpnmag.com/edwebinar.

For an enhanced reading experience, view this article in our digital edition by clicking here.